Paczkowski, Andrzej (ed.) Rozliczenia totalitarnej przeszlości: instytucje i ulice. [Coming to Terms with the Totalitarian Past: Institutions and Streets] 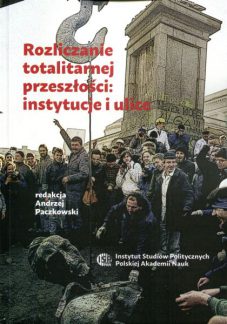 The articles collected in this volume have been written as part of the research project Punishment, Memory and Politics: Revising the Past after World War II, which was carried out by a group of Polish and French historians and political scientists. This project is an attempt at analysing the similarities and differences in the mechanisms of revising the ‘bad past’ and the totalitarian and dictatorial systems that collapsed due to internal factors or disappeared as a result of wars lost. This kind of revision has been already conducted, in the form of legal disposals (including the punishment of those found guilty) and systemic changes, as well as in the sphere of symbols and the formation of social memory. After World War II, however, the revision took on a special dimension and proved to be a long-lasting process: over 70 years after the end of the war, investigations and war crimes trials are still under way. The same is true of the dictatorial rule of General Franco in Spain, which in fact only became the subject of heated public debate 30 years after the regime had collapsed. There are also indications that the revision of the communist system, which broke down in Europe a quarter of a century ago, will not be over soon. Furthermore, in many cases the ‘bad past’ also involved relations between states (e.g. aggression or forced subordination), and thus the way the revision is conducted affects current international relations. Therefore, our research project covers a relatively large chronological and geographical area, beginning with the defeat of the Third Reich and its allies in 1945, through the collapse of numerous dictatorships (which began in Portugal in 1974 and then occurred in Chile, South Africa and The Philippines), and ending with the collapse of the communist system in the Soviet bloc from 1989 to 1991. The four papers relate only to selected fragments of our research and are factual and descriptive. They were presented (in abbreviated versions) at the conference on The Memory of Communism: Actors, Norms, Institutions during the International Council for Central and East European Studies in Makuhari (Japan) in August 2015. Three of the articles concern Poland: institutions that have been established specifically to revise the past and ‘decommunize’ public space. The fourth article presents the part of our research into international relations in the European Union on the issue of the communist ‘bad past’. We are currently preparing the next volume, which will include further parts of our research (e.g. concerning the revision of World War II and the ‘defrancoisation’ of Spanish public space).