The 10th ICCEES World Congress (Montreal, 3–8 August 2021) was a sort of homecoming, since the founding first Congress in Canada almost 50 years before. With the general theme of “Bridging National and Global Perspectives,” the World Congress was hosted by Concordia University and the Canadian Association of Slavists. In his opening remarks, ICCEES President Georges Mink noted the methodological and epistemological rupture of 1989-1991, which enriched scholarship in all disciplines studying Central and Eastern Europe. Despite challenges related to COVID (forced postponement from 2020 and the switch to an all-virtual format), the World Congress was a success. In addition to the core program’s 333 sessions, special events included keynote addresses, roundtables, films, lectures, and book discussions. 45 countries were represented by 933 scholars presenting in a wide range of disciplines. The top 10 levels of participation by country were: United States–205, Canada–157, Japan–87, Russia–76, U.K.–65, Germany–63, Finland–37, Poland–29, Ukraine–28, France–28. The international diversity of World Congress participants, the addition of a new member association (Société française d’études russes et est-européennes en sciences sociales – SFERES), and new expressions of interest from other countries are positive signs of the continued growth of ICCEES. 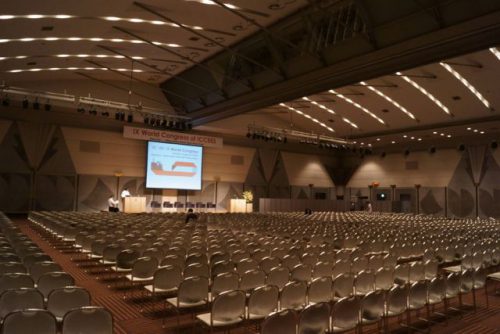 Under the slogan “Makuhari – Where Many Wests Meet Many Easts”, the IX World Congress was held in very hot and humid weather. The Congress was a resounding success. There were 1310 delegates from 50 different countries attending 378 panels and roundtables. In terms of national representation, large numbers of delegates came from the immediate geographical region, and the Russian contingent, although reduced at the last minute by funding difficulties, was also substantial. The quality of papers and sessions was generally very high, with the lead being set by the opening session at which former prime ministers of Russia (Sergei Stepashin) and Japan (Yasuo Fukuda) and a former foreign minister of South Korea (Han Sung-Joo) shared candid really interesting thoughts on recent developments. Publication of a series of volumes of papers from the Congress is being organized by Professor Andrii Krawchuk.

This Congress was an exceptionally important one in ICCEES’ history: it was the first held outside Europe or North America, and it symbolizes the drive over the last five years to expand the organization’s scope throughout Asia. Sincere thanks is owed to our Japanese colleagues for organizing such a successful occasion, and we look forward to the next Congress to be held in Canada in 2020.

The VIII World Congress was held in Stockholm, Sweden, from Juli 26 – 31, 2010. Its topic was „Eurasia – Prospects for Wider Cooperation“. Congress President was Prof. Irina Sandomirskaja. The Congress was attended by more than 1,200 scholars from 57 countries in all five continents.

The 7th World Congress of ICCEES with the topic „Europe – Our Common Home?“ was held in Berlin, Germany, at the Humboldt
University, July 25th – 30th 2005. It was organized by the DGO (Deutsche Gesellschaft für Osteuropakunde e.V.) under the direction of Professor Thomas Bremer of the Westfälische Wilhelms-Universität in Münster. The conference focused on the integration of the ten new member states of the European Union and on the prospects of the continent 15 years after the change of the political systems. In view of the current financial and constitutional problems, the conference dealt with the following questions: To what extend is the idea of a „common house of Europe“ realised? What are the new commonly shared characteristics and values in Europe? What are the differences and parting lines emerging from the new situation?