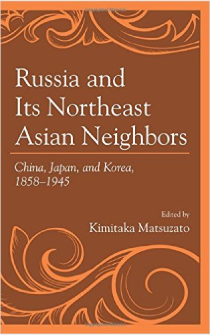 As a result of the Aigun (1858) and Beijing Treaties (1860) Russia had become a participant in international relations of Northeast Asia, but historiography has underestimated the presence of Russia and the USSR in this region. This collection elucidates how Russia’s expansion affected early Meiji Japan’s policy towards Korea and the late Qing Empire’s Manchurian reform. Russia participated in the mega-imperial system of transportation and customs control in Northern China and created a transnational community around the Chinese Eastern Railway and Harbin City. The collection vividly describes daily life of the emigre Russians’ community in Harbin after 1917. The collection investigates mutual images between the Russians and Japanese through the prism of the descriptions of the Japanese Imperial House in Russian newspapers and memoirs written by Russian POWs in and after the Russo-Japanese War and war journalism during this war. The first Soviet ambassador in Japan, V. Kopp, proposed to restore the division of spheres of interest between Russia and Japan during the tsarist era and thus conflicted People’s Commissar of Foreign Affairs, G. Chicherin, the Soviet ambassador in Beijing, L. Karakhan, and Stalin, since the latter group was more loyal to the cause of China’s national liberation. As a whole, the collection argues that it is difficult to understand the modern history of Northeast Asia without taking the Russian factor seriously.